Maids of Honour tarts, Richmond’s greatest contribution to the culinary arts, are believed to have originated in the Royal kitchens at Hampton Court. Legend has it that the recipe was locked away in an iron chest until it was rediscovered by Henry VIII who presented it to Anne Boleyn, lady-in-waiting to his first wife, Catherine of Aragon. She is believed to have made the tarts for Henry who, in turn, named them "Maids of Honour" after her. Another story has it that Henry came across Anne and other attendants eating the cakes from a silver dish and, after tasting them, was so delighted that the recipe was kept secret and locked in an iron box in Richmond Palace. Yet a third version claims that, in order to protect the secret, the unfortunate "maid" who invented the tarts was imprisoned within the Palace grounds and ordered to produce the pastries solely for Henry and the Royal Household.

Whichever tale is correct, the recipe appeared in the second edition (1665) of The Accomplisht Cook by R. May. The commercial production of Maids of Honour in Richmond began in 1750 in Hill Street when Thomas Burdekin took a small shop next to the White Hart Inn. Within 20 years he was able to expand into the next-door premises - now number 3 Hill Street. Burdekin went on to become a vestryman in 1785 and in 1790 he sold the business to William Hester. Hester was succeeded by John Lea and then, in 1830, by John Thomas Billett. (Take a walk down Victorian Hill Street.).

The Billett family became synonymous with Maids of Honour tarts and the famous shop front proclaimed that it was "the original shop of the Maids of Honour". Grandfather, father and son in turn welcomed visitors to Richmond who made the mandatory pilgrimage to the shop. On one famous day at the turn of the 20th century no less than 8000 cakes were baked and sold. In 1908 big business seems to have taken over when the Richmond (Original) Maids of Honour Limited under the chairmanship of Mr Colnbrook, whose sister had married John Thomas Billet junior, came into being. In 1921 it was again taken over by Hygienic Bakeries Ltd who already had several shops in the area. The shop closed in 1957.

Robert Newens served his apprenticeship at the Hill Street bakery and in 1850 he opened a shop in King Street, later moving to number 3 George Street where he continued the tradition of making and selling the Maids of Honour. Robert’s son, Alfred, opened a new establishment at 288-290 Kew Road, Kew in 1887 where he also made Maids of Honour from the recipe passed on by his father. Alfred died in 1927 leaving the business to be carried on by his son John and daughter Kathleen. The bakery suffered serious bomb damage during the Second World War. After the war, John’s son, Peter set to work to repair the damage and get the business back on its feet. The bakehouse was rebuilt and new gas ovens installed as well as the shop front being remodelled. The shop, still owned and run by the Newens family, is a bakery as well as a restaurant and tea room where the Maids of Honour are served, made to a closely kept family secret recipe. 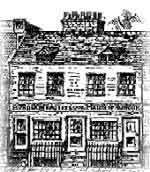