Long before Richmond Bridge was built, a ferry was operating at the site, that is from Ferry Hill (now Bridge Street) across to Twickenham Meadows. 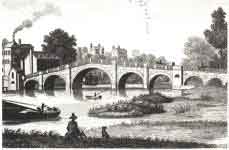 There were two boats: one for passengers and a much larger vessel, the "horse-boat" for the conveyance of horses, small light carts and bulky goods. Carriages, however, could not be taken on the ferry.

In 1773, Mr Windham, the lessee of the ferry at that time, offered to sell the remainder of his lease to the Crown Commissioners for £6,000 and to use the money for the erection of a bridge. A petition was made to the House of Commons for leave to bring in a Bill.

The local inhabitants, though in favour of a bridge being built, were strongly opposed to Windham’s scheme. There were 3 main objections: to the Richmond site (Ferry Hill) which was inconvenient to access and had a very sharp declivity; to the proposed material for the structure, wood; and to the fact that the bridge would be privately owned.

This opposition led Windham to withdraw his Bill. Plans for a stone bridge, to be erected from Water Lane, were put in hand. The cost, £26,000, was raised on "tontine" shares of £100 each. (Under this system each shareholder received a proportion of the bridge tolls until his death, when his shares were added to those of the remaining shareholders. The tontine could not lapse until the death of the last surviving shareholder).

Counter opposition was to follow, however: from the inhabitants of Water Lane who would have lost their homes in the necessary widening of the Lane; from the lessee of the “Feather Inn”, which would also have been demolished; and from the proprietor of Twickenham Farm, where the bridge would end on the Middlesex side of the river.

His Majesty’s Commissioners decided, therefore, that the bridge should, after all, be built from Ferry Hill and the Richmond Vestry had no alternative but to follow their decision.

Horace Walpole wrote to Henry Seymour Conway on 23 June 1774: “…Pray, for the future remain home and build bridges: I wish you were here to expedite ours to Richmond, which they tell me will not be passable these two years. I have done looking so forward!”

The foundation stone of Richmond Bridge was laid on 23 August 1774 by the Hon. Henry Hobart. The principal architect was James Paine (around 1716 to 1789), who was also responsible for the bridge at Kew (constructed 1783 to 1789) which preceded the present one (built in 1903). In March 1758, Paine had been appointed Clerk of the Works at Richmond New Park Lodge. Earlier, in December 1746, he had been appointed Clerk of the Works at Charing Cross Mews; a position which he afterwards exchanged with Kenton Couse for the Clerkship of the Works at Newmarket. It was Couse (1721 to 1790) who assisted Paine in the building of Richmond Bridge.

The bridge was badly needed as Walpole found out. He wrote to Conway on 27 September 1774: "It has rained this whole month, and we have got another inundation. The Thames is as broad as your Danube, and all my meadows are under water. Lady Browne and I, coming last Sunday night from Lady Blandford’s, were in a piteous plight. The ferry-boat (from Richmond to Twickenham) was turned round by the current, and carried to Isleworth. Then we ran against the piers of our new bridge, and the horses were frightened."

The bridge was completed in 1777. The London Magazine (1779) described it as: “a simple, yet elegant structure, and, from its happy situation,… one of the most beautiful ornaments of the river and the country adjacent. It is built with Portland stone from the design of Mr Payne (sic) of London, a celebrated architect, and the masonry was executed by Mr Carr of Richmond…”

In 1859, the last surviving tontine shareholder died, so the tolls were discontinued.

The bridge was widened during 1937, and apart from being less "hump-backed", its original appearance was cleverly preserved.

More information on Richmond Bridge and other aspects of the history of the London Borough of Richmond upon Thames is available in the Local Studies Library and Archive. This includes reference copies of various books, periodicals, photographs and other material.