A School Street is where a road with a school temporarily closes to become a pedestrian and cycle zone only during the school's opening and closing times, to enhance the safety of school children.

Why we want to create School Streets

We have been working with schools in the borough to promote active travel for a number of years, however many schools and parents are still concerned by road safety and air pollution around schools.

We receive many requests for general traffic management and safety improvements that are demonstrated to not be justified, given finite resources, in terms of accidents, speeds and traffic flows.

However, a more moderate approach is taken near schools recognising the particular concerns there are towards children's safety, active travel and exposure to pollution. It is hoped that some of these concerns will be addressed by reducing the number of vehicles at school start and finish times.

By temporarily closing roads outside the school, we hope to create a safer, more pleasant environment around the school. We aim to reduce congestion and idling vehicles as well. New schemes are being proposed under an experimental traffic order to be able to monitor any impacts before considering making the schemes permanent.

The following School Streets were recently approved to be made permanent at the Transport and Air Quality committee. Please see the linked drawings for further information on each proposal. Schools Streets will be added to this list as they are agreed.

School Street schemes were approved to be consulted on and implemented, if approved, at the Transport and Air Quality committee (Item 16). Since the committee approval in September 2019 and the impact COVID-19 had on schools needing to social distance pupils, parents/carers and staff, we received funding to implement School Streets in Richmond before 15 October 2020.

The above School Streets were consulted on as part of an Experimental Traffic Order and consultation ran alongside the trial. The impacts of these schemes were reported to the September Transport and Air Quality committee (Item 6) before a decision was made whether to make them permanent.

All the above School Streets were approved to be made permanent. Hampton Hill Junior School SS9, was trial, but is being removed.

Consultation for St Richard Reynolds Catholic College SS4 closed on 10 November 2021 and was reported separately at November Transport and Air Quality committee (Item 6), with a decision to make it permanent.

We recently consulted on the following School Streets due to there being a majority support for the scheme they will be implemented under an Experimental Traffic Order:

We have also invited the following schools to partake in Phase 3:

Future School Streets will also be implemented under an experimental traffic order, subject to prior public consultation.

If you want to hear more about the initiative for your school, please email us putting Richmond School Street in the title of your message.

All schools were contacted offering either a School Street or other measures where School Streets were not feasible.

These were implemented under an experimental Traffic Management Order and residents, businesses and the wider school community were given an opportunity to make representations whilst the scheme was live. We created a project overview and timeline

(pdf, 114 KB), showing each stage of the programme, including when we engaged with residents, the school and the wider school community (pupils and parents/carers).

As more Schools Streets are confirmed, their details will be made available in the tables above. An overview will also be published, and we will only implement an Experimental Traffic Order subject to the results of a prior public consultation. It is anticipated phase 3 will be implemented this academic year.

Vehicles will not be able to enter the streets between the times of operation unless they are considered exempt. Please see our frequently asked questions section for further details of exemptions and how to register an exemption online for ANPR camera enforced School Streets.

Signs, like the generic example alongside, will inform drivers of the restrictions before the entrance to the School Street. At some closures, advance warning signs will be installed, where needed, as will camera signs, where appropriate.

Do not confuse permit holders with holders of Controlled Parking Zone permits. These are entirely separate permits, and one does not cover the other.

Residents and businesses who live and work within the School Street restricted area will be able to apply for exemption, as well as Blue Badge holders needing to access these properties. The scheme will not operate in the school holidays or at weekends. Full details on this are included in each consultation.

There may be a physical barrier preventing access, and details of each scheme are provided during the consultation and on the website.

Vehicles already parked within a School Street can exit without a penalty.

Automatic Number Plate Recognition (ANPR) cameras have been installed at some School Streets. Please see the exemption page for details of which schools these are and how to register exemption.

There were concerns of displaced traffic, so the schemes were trialled over 12 months to fully understand their impact. This also allowed the opportunity for people to adapt and change their travel behaviour. Our monitoring showed that most schools enjoyed a reduction in car travel to school and that the reduction in vehicles entering the School Street was greater than the displaced traffic in adjacent streets.

View the most common questions about School Streets. 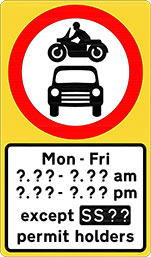