A small but historic woodland on the towpath in Petersham, with mature trees, hazel coppice and emerging wet woodland. 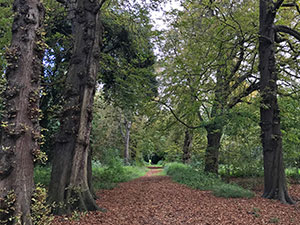 The wood was once part of the landscaped grounds of the original building on the site of the current Petersham Lodge, which stood at the beginning of the eastern driveway to Ham House. An avenue of fine mature trees which partially date to around 1750 remain along the central path and a summerhouse once stood overlooking the river.

In 1902, Sir Max Waechter purchased the land to save it from development and gave it to the then Richmond Corporation, now Richmond Council, for preservation. Since then, the wood has been a public open space and is now managed primarily as a nature reserve due to its designation as a Site of Interest for Nature Conservation. We work closely with Petersham Environment Trust.

Petersham Lodge Woods are accessible at all times. It floods occasionally on high tides.

The nearest station is Richmond, and the area is served by bus routes 65 and 371.

All council-managed parks and open spaces are covered by Public Space Protection Orders and formal byelaws, to help us reduce antisocial behaviour and breaches of dog control orders.

Up to: Find a park