1635 Moses Glover's map of Isleworth Hundred shows a farm of some 12 acres owned by Henry Saunders.

1715 Dorothy Thompson sells the house and land to William Leeson.

1722 William Heath sells the house and land to Archibald Campbell, Lord of Islay.

1725 Enclosure of a further 12 acres from Hounslow Heath granted by the Manor Court of Isleworth Syon to Lord Islay. On this new land and the land bought in 1722 he built his new gardens, with a Greenhouse and Aviary, surrounding the gardens with a moat.

1741 Rocque's map shows the estate in its finished form, given the name Whitton Park.

1743 Lord Islay succeeds his brother to become 3rd Duke of Argyll.
A view of Whitton Park Canal and Gothick Tower

1761 Death of the Duke of Argyll, his Whitton estate is inherited by Elizabeth Ann Williams, his mistress for many years.

1762 Elizabeth Ann Williams dies, her son William, by the Duke, succeeds her The Earl of Bute transfers some of the finest examples of the Duke of Argyll's trees and plants to the new Kew Gardens.

1765 The Whitton estate is put up for sale, a detailed catalogue is prepared describing the buildings and gardens. The estate is sold to William Pope and others.
Plan of the estate, 1766

1767 George Gostling buys the property. He converts the Greenhouse to a mansion for his own use. 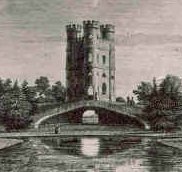 1767 George Gostling separates the estate keeping the Greenhouse, now converted for living in.

1783 George Gostling II adds a pediment with a bas-relief on the front of the house depicting the destruction of the Titans by Jupiter.
Map of Whitton, 1786

1797 After buying back the Duke's house he employs Humphrey Repton to advise on landscaping the estate. From this date the lakes take their familiar shape.

1820 George Gostling II dies in London, his widow Lydia succeeds to the estate.

1841 Death of George Gostling III. His younger brother Benjamin succeeds to the estate.

1843 Benjamin dies and is succeeded by his brother Augustus.

1847 Augustus Gostling dies. His widow Hannah then lives there until her death.

1854 Death of Hannah Gostling, the estate goes to George Gostling II's eldest daughter, Lydia. Lydia and her younger sister Maria move to Whitton with their niece Emily and her husband.

1874 Maria Gostling dies, by Lydia's will Charles Edward Murray inherits, and changes his name to Gostling-Murray.

1892 Charles Gostling-Murray dies and is buried at Twickenham Cemetery, two thousand people attend his funeral. The estate passes to Charles' two surviving daughters by Emily. They sell the estate to provide for his widow.
Photograph of Whitton Park gates, 1890

1909 A determined effort is made to preserve the land within the old moat as a public park.

1773 George Gostling sells off the Duke's House and part of the estate to Lady Lichfield.

1796 Sir William Chambers dies and the estate is sold to Mrs Dennis.

1831 Death of Sir Benjamin Hobhouse. His son John Cam Hobhouse inherits the lease, but appears not to have lived there.

1847 The house reverts to the Gostling family and is demolished soon after. The gardens and grounds were then incorporated with the main house