1731 Becomes Countess of Suffolk when her estranged husband assumes the title on the death of his elder brother.

1734 Dismissed from court shortly after the death of her estranged husband.

1767 Lady Suffolk dies at Marble Hill on 26th July. The estate is entailed and cannot be sold by her heirs Lady Suffolk's nephew, 2nd Earl of Buckinghamshire, inherits the house and occupies it from time to time until his death in 1793.

1768-9 House is let to John Halliday of Marylebone.

1793 Lord Buckingham dies. Lady Suffolk's great niece, Henrietta Hotham, has a life interest in the house until her death in 1816, but usually lives either in Little Marble Hill or in Richmond.

1824 The Hobart heirs break the entail and sell Marble Hill to Timothy Brent, an army agent who lives in Little Marble Hill.

1825 Marble Hill bought by Captain (later Lieutenant-General) Jonathan Peel for £9,298 3s. Peel, a younger brother of Sir Robert Peel, was a soldier, an M.P. and a keen racing man. He married the daughter of the Marquis of Ailsa. The Peel family usually occupied Marble Hill for the next 60 years with occasional tenants.

1887 Lady Peel dies. The contents of the house are auctioned off, but the sale of the house and estate found no buyers. Asking price is £52,000.

1898 The Cunard family purchase the estate for £35,000 and plan to convert the grounds into a suburban housing estate.

1902 After a public campaign and donations from various local government bodies and individuals, £72,000 is raised and the property transferred in trust to London County Council on 1st August.
Photograph of Marble Hill House 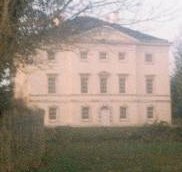