Due to essential maintenance, online forms will be unavailable from 7am to 10pm on Sunday 28 November. We apologise for any inconvenience caused.

Stephen Hales was one of the most famous British scientists of his time. His researches into the fundamentals of animal and plant physiology and on the nature of air provided a theoretical framework for scientists for the best part of a century. Hales was also an energetic philanthropist and conscientious clergyman. He brought practical inventiveness and scientific work to bear on the social needs of the age.

Hales was born on the 17 September 1677 in Kent, and died on 4 January 1761 at Teddington, Middlesex. He was the grandson of Sir Robert Hales, Baronet (died 1693), and was thus a member of an influential county family.

After being privately educated by tutors he proceeded to Corpus Christi College, Cambridge, becoming a Fellow of the College in 1702. In 1709 he was ordained and inducted to the 'Perpetual Curacy' of Teddington, a ministry he held until his death. In March 1720 he married Mary Newce of Much Hadham but was bereaved in October of the following year. 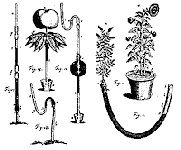 Hale's interest in scientific experiments, which dated from his Cambridge years, first came to public notice in 1719, when he read a paper to the Royal Society, to which he had been recently elected a Fellow, on the effect of the sun's rays on the sap of plants. He was made a Fellow for having performed a series of crucial experiments on the circulation of the blood. His book on plant physiology, Vegetable Staticks (staticks in this case meant mathematical measurements) was published in 1727. This book contains the record of a great number of ingenious, but simple experiments. He measured transpiration in plants and root-pressure, the force of upward sap pressure in stems. He also demonstrated that plants draw something specific from air, now known to be carbon dioxide. The significance of this discovery was overlooked at the time, however, as there was little understanding of the gases in the atmosphere. Similar investigations into the arterial systems of animals appeared in 1733 under the title Haemastaticks. He determined the existence of something called blood pressure and devised a mechanism for measuring it. He also noted that it varied between arteries and veins, between contractions and dilations of the heart and in large and small animals.

By this time his interests had become increasingly centred on the practical consequences of scientific research. He undertook experiments on food preservation and ventilation, publishing in 1739 Philosophical Experiments, in 1743 A Description of Ventilators and in 1758 A Treatise on Ventilators. He succeeded in getting his "artificial ventilators" fitted to prisons, greatly reducing the death rate then prevalent in such insanitary conditions. He also made observations about the distillation of fresh water from salt, for the preservation of food, for measuring the depths of the ocean (using a mercury pressure gauge) and for a thermometer to measure high temperatures. He also was the first to suggest to housewives that putting an inverted teacup in their pies would prevent the crust becoming soggy!

In 1739 Hales had received the Royal Society's Copley Medal for his investigations of the complaint known as "the stone". He spent a great deal of time trying to develop a solvent for stones in the bladder and the kidneys and actually devised a method of extracting stones from the bladder.

In old age the "Patriarch" of Teddington had become a national figure. His scientific books were widely read and he had written numerous articles for magazines and newspapers on his inventions and on his other life long campaign against the evils of excessive use of alcohol. He was an opponent of slavery and a trustee of the (originally) non-slave colony of Georgia.

Hales died after what was called a slight illness at the age of 84 and was buried at his own request under the church tower at Teddington. "Minister of this parish fifty one years" ran the lettering on his tomb and there can be little doubt that he left behind him many affectionate memories amongst his parishioners. For the nation at large, there was to be the constant reminder of a monument in Westminster Abbey, carved by Wilton.

With special thanks to Dr D.G.C. Allen, Curator-Historian, Royal Society of Arts.