Fred Karno and the Karsino

Tagg's Island lies in the mid-Thames near Hampton, up river from Molesey Lock.

The Tagg family, who had run a successful boat-building business for some years, established an hotel on the island in 1870. The hotel was very popular and by the late 19th century Tagg's Island was the leisure venue for practically everyone in society. Thomas Tagg died in 1897 and by the early 1900s the entire Tagg family empire had fallen on hard times.

Fred Karno was the stage name of Frederick John Westcott, who had made a fortune as a music hall impresario. He employed a group of talented comedians, amongst whom was the young Charlie Chaplin. He spent his summers on Tagg's Island, living on his houseboat, The Astoria . He had aimed to have the best and most luxurious houseboat ever seen and The Astoria cost him around £20,000, an enormous sum at the turn of the century. It had richly panelled cabins and marble bathrooms.

In 1912, eight years after Karno had first visited Tagg's Island, he embarked on a huge gamble. He bought the island and the hotel. He engaged the well known architect Frank Matcham and started to build, in place of the original, what would turn out to be the most luxurious hotel of the day, The Karsino. The builders were Allen & Co of Westminster and the West End decoration and furnishing specialists Messrs. Ropley were commissioned to do the interior.

Features offered included a Dining Room, in a "quite unique" colour scheme of grey and purple, a Billiard Room with old oak panelling and a Ballroom with a resident orchestra which seated 350. Ferries were laid on to get the guests to the hotel and 100 small boats were provided for their amusement. The gardens were extensively landscaped and the catering was placed in the hands of Luigi, one of the world's greatest maitre d'hotel. The hotel opened its doors for the first time in May 1913 and was an instant success.

The interior of the Karsino Palm Court Pavilion. Illustration.

In 1914, Karno decided to expand the facilities and added a Palm Court Concert Pavilion with a capacity of 600. The floor was designed for dancing, the walls decorated with an ornamental painted trellage and on each side, large French windows opened onto the lawns. The whole structure had a domed roof painted with views of Hampton Court, Windsor Castle and other landmarks. The stage was reversible so that the audience could sit in the pavilion if the weather was poor or on the lawns if fine. Amongst the artists booked were military bands, The Palladium Orchestra, Florence Smithson, Jimmy Glover's Band, Elsie Southgate and Jack Hylton and his Orchestra.

Boating and fishing were the major attractions along with horse-racing at the nearby courses, Hurst Park, Kempton Park and Sandown Park. Picnicking in the open was also popular and the notable artist Sir Alfred Munnings' painting "Tagg's Island" depicts a picnic on the island in the 1920s.

When war broke out in 1914, The Karsino continued to operate providing a popular base for returning officers and their families. However, Karno was losing money steadily and post-war, few had the money to spare for such lavish entertainment. Three summers of bad weather proved the final straw for a venue so dependent on the river and the grounds for its appeal, and in 1925 Fred Karno was forced into bankruptcy. He died in 1941.

After Karno's bankruptcy, The Karsino changed hands several times. No-one managed to make the hotel and island a profitable enterprise and indeed, several more of the owners went bankrupt. In 1972 the hotel was finally demolished and a series of fires destroyed the other buildings on the site. 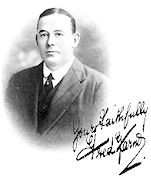