Due to essential maintenance, online forms will be unavailable from 7am to 10pm on Sunday 28 November. We apologise for any inconvenience caused.

"My first vivid recollection is my arrival at Pembroke Lodge in February 1876. To be accurate, I do not remember the actual arrival at the house, though I remember the big glass roof of the London terminus, presumably Paddington, at which I arrived on my way and which I thought inconceivably beautiful. What I remember of my first day at Pembroke Lodge is tea in the servant's hall. It was a large, bare room with a long massive table with chairs and a high stool."

Thus Bertrand Russell describes in his autobiography his first impressions of the house in Richmond Park where he was to spend his childhood and youth. He was born in Ravenscroft, near Tintern, Monmouthshire, the second son of Viscount Amberley and grandson of Lord John Russell, who had held office of Prime Minister from 1846 to 1852 and 1865 to 1866. His parents - both agnostics and ardent theorists of reform - died when he was still an infant and at the age of three he was put in the charge of his grandparents, who lived at Pembroke Lodge in Richmond Park. Up to the time he went to Cambridge, he received almost all of his education at home where he was taught by governesses and tutors.

In 1890 he entered Trinity College, Cambridge and here discovered "a new world of infinite delight." In 1894 he obtained a first class degree, with exceptional distinction, in the Moral Science Tripos. In the same year he married Alys Whittall Pearsall. This was the first of four marriages, the last being in 1952, when he married Edith Finch. From about this period he ceased living at Pembroke Lodge. On leaving Cambridge he spent some months as Honorary Attache at the British Embassy in Paris. Later, in Berlin, he made a special study of social and economic questions in Germany and used the results of his research in a series of lecture which he gave at the London School of Economics in 1896. These lectures were afterwards published under the title German Social Democracy (1896).

His first major work A Critical Exposition of the Philosophy of Leibnitz was published in 1900. In 1903 his Principles of Mathematics appeared in which he set out "first to show that all mathematics follows from symbolic logic and, secondly to discover so far as possible what are the principles of symbolic logic itself." He was an unsuccessful candidate for the Woman Suffrage party at Wimbledon in 1907. The Principia Mathematica, published between 1910 and 1913, was written in collaboration with A.N. Whitehead. It has been described "one of the decisive books in the history of both mathematics and logic."

During the 1914-1918 war he devoted himself to the pacifist campaign. His activities attracted much censure and he was in due course removed from the lectureship which he held at Trinity College. In February 1918 he was sentenced at Bow Street to six months imprisonment for having published comments on the American Army "intended and likely to prejudice His Majesty's relations with the United States." While he was serving this sentence he wrote his Introduction to Mathematical Philosophy which was published in 1919. During the 1920s he published various political works, including The Prospects of Industrial Civilisation (1923), written jointly with his second wife Dora Black. More important, however, were his ABC of Atoms (1923) and ABC of Relativity (1923), both perfect models of Lucidity, and The Analysis of Matter (1927), which contained an excellent review of modern physics. In Freedom and Organisation (1934) he traced traced the main causes of political and social change in Europe and America during the 19th century. This work foreshadowed his later, monumental work The History of Western Philosophy and its connection with Political and Social Circumstances, first published in 1945.

Russell was awarded the Nobel Prize for Literature in 1950. In the same year he came to live again in Richmond, at 41 Queens Road, a house which he shared with his son's family. In his autobiography he writes:

"Returning to Richmond, where I spent my childhood produced a slightly ghostly feeling, and sometimes found it difficult to believe that I still existed in the flesh… I had hoped vaguely that I might somehow rent Pembroke Lodge and install myself and my family there. As this proved impossible, I took a largish house near Richmond Park, turning over the two lower floors to my son's family and keeping the top two for myself. This has worked more or less well for a time in spite of the difficulties that almost always occur when two families live at close quarters. We had a pleasant life there, living separately, each having our own guests and coming together when we wished. But it made a very full life, with the family coming and going, my work, and the constant stream of visitors."

He was displeased with the manner in which Pembroke Lodge had been converted into flats and a tea-shop and deplored what he considered to be the elimination of its historic interest. He moved away again from Richmond in 1956. In 1958 Russell helped to found the Campaign for Nuclear Disarmament and was elected as its president. He later broke with C.N.D. and in 1960 formed the Committee of 100 "for civil disobedience against nuclear warfare." He continued to speak for the C.N.D., to issue urgent statements to the press and to stage public demonstrations to the extent that his health allowed. In 1961 he was summoned, with others of the Committee, for inciting the public to commit a breach of the peace. This resulted in a seven-day sentence which he served in Brixton Prison. He resigned from the presidency of the committee in 1963 and the same year announced the launching of two foundations: The Bertrand Russell Peace Foundation and The Atlantic Peace Foundation. During his last two years he lived in growing isolation at Plas Penrhyn, his country home in North Wales. He died there on February 2 1970. 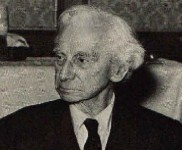