These 3 hour, immersive guided tour on a vintage London bus is ideal for groups and individuals with a common interest in one of the most defining decades of 20th Century Britain. You’ll hear about the birth of popular music and the counterculture that spawned Swinging 60s London as you pass by the homes of notable music legends, historic locations and iconic music venues on your journey from the Hard Rock Cafe in Piccadilly, down the Kings Road in Chelsea to Richmond via West London's 'Cradle of Rock'. THE HALF MOON Pub in Putney where live music has been played every night since 1963. OLYMPIC STUDIOS in Barnes which has featured more prominently in recording the world’s top bands and film scores than any other… Including Abbey Road! We take in TWICKENHAM FILM STUDIOS where THE BEATLES filmed ‘HELP!’ and ‘A Hard Day’s Night’. You’ll see where ROD STEWART got his first break after visiting the Eel Pie Island Hotel to watch Long John Baldry. You’ll also hear about the artists who performed at the RICHMOND JAZZ & BLUES FESTIVAL and its ongoing legacy on your way to our drop off point at One Kew Road in Richmond, previously the fabled STATION HOTEL home to the original CRAWDADDY CLUB where THE ROLLING STONES kicked off their career on 24th February 1963 and where THE BEATLES came to watch the less than two months later. The 60s hits we play on the original Routemaster London bus are by the seminal artists who performed at local venues... The Rolling Stones, Rod Stewart, The Beatles, Elton John, The Yardbirds, David Bowie, The Who, Cream, Pink Floyd, The Kinks, Manfred Mann, The Animals, Genesis, Long John Baldry, Led Zeppelin and Deep Purple Mott The Hoople and many more… HOP ON IN RICHMOND OPTION If you'd rather hop on at Richmond, simply choose that ticket option when booking... LIVE 60s MUSIC OPTION For that total 60s experience why not include some live music by 60s tribute and legend bands playing LIVE at One Kew Road, Richmond. (See website for details) 25% OFF YOUR FOOD AND DRINKS BILL One Kew Road bar and restaurant have offered our online ticket holders and massive 25% off their food and drinks bill (when ordered together). Just show your tickets to the waiter when ordering. It is advisable to book your table beforehand 020 8940 5768 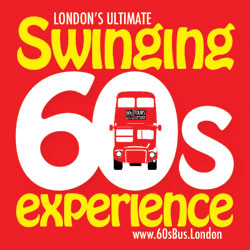