The cost of litter and BBQs on wildlife

Dropping litter in the parks isn’t just unsightly, it can have a devastating impact on wildlife. Too often our park teams have spotted the shocking impacts of left litter and BBQs on the natural environment and wildlife, and we have listed a number of the top impacts on nature. Please help nature thrive and leave no trace by taking rubbish home - or putting it in the bins if there is space, and please remember, BBQs aren’t allowed in the parks. 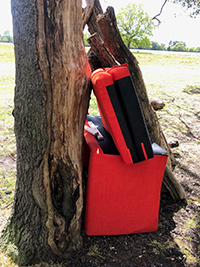 We spotted this colourful sofa suite jammed against the trunk of a mature oak tree in Bushy Park. We are staggered that someone would consider dumping such a large piece of furniture in the heart of this precious park – one which is designated as a Site of Special Scientific Interest and host to a wide diversity of wildlife. It took time, effort and cost for our staff to remove and dispose of it, taking them away from their more important work to care for the park and its wildlife.

We spotted a cormorant in The Regent’s Park - a fish-eating species, and it has its head and beak trapped in the discarded plastic rings from a pack of beer. This would most likely mean it is unable to catch and eat any but the smallest fish, which is very bad news for a bird which needs to be able to hunt and catch fish of all sizes to survive. It will also likely cut into the bird, causing wounds which will get infected.  Unfortunately, it will be impossible for us to catch this wild bird to remove the plastic, unless it becomes very weak through starvation – but by then it might be too late to help it.

All too often stags are spotted by our wildlife officers tangled in plastic. This can be really distressing for the animals who will do what they can to shake the plastic off. Unfortunately, deer and other wildlife are attracted to left over picnic scraps left in bags and can even end up eating the plastic bag and other litter by accident, which can then get caught in their intestine causing them a lot of pain, and difficulty digesting food.

Pelicans were first introduced to St James’s Park in 1664 as a gift from the Russian Ambassador and there have been pelicans in the park since then. Back then plastic wasn’t a problem, but today’s flock of six birds have been spotted juggling plastic bottles - a truly distressing sight, and worse if they were to accidentally eat the litter.

This beautiful bird is a white-headed duck and it is part of St James's Park’s waterfowl collection. Sadly, this one has a blue rubber band caught around its neck which could cause problems feeding and breathing, or could cause it to get trapped in vegetation. Once out of the water, there is a chance that our Wildlife Officers might be able to catch it to remove the band but perhaps not before it has caused real harm. Unfortunately, we’re expecting more birds to suffer a similar fate with the amount of discarded face masks that are ending up in the parks’ waterbodies.

This is awful on two counts. The dumped trash is unsightly, and the plastic bottles and cans will not decompose for many, many years and may trap wildlife – of course our staff stepped in to clear it away, but that takes them away from other tasks managing habitats and helping wildlife. But importantly, bonfires and BBQs aren’t permitted in the park. Fires often get out of hand, particularly in dry weather, damaging even larger areas of grassland habitat and trees, and killing wildlife such as voles, lizards and invertebrates.  They also damage wildlife habitats – both areas underneath and near to the fires, but also any deadwood placed in the fire. Deadwood is actually an incredibly important habitat, supporting a huge variety of wildlife, from fungi to rare invertebrates.

Our volunteers spotted a hedgehog struggling through The Regent’s Park one night. This is the only park in central London known to have breeding hedgehogs – a species sadly in decline across the UK – and our teams are specially trained to care for them and help them thrive. Which makes it especially distressing to see it entangled in a glitzy party balloon attached with a long chord. Litter trapped to its back brings a high chance of the hog getting caught on something and becoming trapped. It also draws attention to other animals – such as dogs or foxes – putting it at greater risk of harm. We were able to free this little one as luckily our volunteers were out and about, but we’re concerned that next time an animal won’t be so lucky. 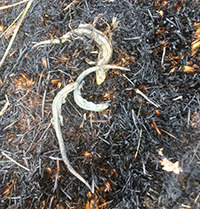 This distressing photo shows three of four lizards that were killed in a fire covering 100 square meters in Richmond Park during the lockdown last year.

We don’t know for sure how this particular fire started but they are often caused by BBQs, which are forbidden in the Royal Parks.

The fire in the photos also killed lots of snails and other important invertebrates as well as destroying the habitat itself. Previous fires have killed grass snakes, toads, frogs, different species of newts and stag beetles, which all contribute to the parks’ rich biodiversity. Please don’t light BBQs: protect this wonderful wildlife.