On 13 August 2020, Hammersmith and Fulham Council informed us that Hammersmith Bridge will be closed to all members of the public, including pedestrians and cyclists, from 5pm, following expert technical advice.

Hammersmith Bridge is owned and maintained by the London Borough of Hammersmith and Fulham (LBHF). Transport for London (TfL) is responsible for managing bus services across the bridge.

It was built in 1887 and is one of the most loved and most photographed Thames crossings. It is a Grade II* listed structure. Because of this, both parts and tools often have to be custom made, which can be costly and take a long time to produce.

It has a very high traffic volume for its age, with more than 20,000 vehicles crossing it every day. Up until 2015, TfL was sending 100 buses an hour over the bridge. It was never designed to carry this volume and weight of traffic and the constant vibration from those vehicles damages the bridge and road surface.

Major repair works to the bridge are now required. The refurbishment work will include overall strengthening of the structure and an improved road surface.

We are working with Hammersmith and Fulham (H&F) Council and TfL to keep residents informed of impacts as a result of the closure. 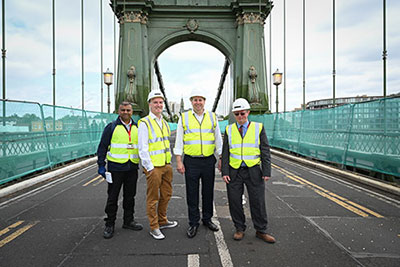 On Monday 2 September 2019, Hammersmith & Fulham Council and Transport for London confirmed that works have started on repairing Hammersmith Bridge.

Following a detailed investigation by a team of world-leading specialist engineers, TfL and H&F Council agreed on the future requirement of the bridge. The first stage of the restoration programme (concept design) has now begun and TfL has provided £25 million to pay for it.

The restoration is expected to take approximately three years. Once completed, it will enable cars and buses (including the heavier electric single-deckers) to cross the bridge. But to prevent future damage, we will continue to limit the flow of buses on and off the bridge.

TfL and H&F Council are looking at the most appropriate funding for the next phase of construction, ahead of the planned procurement and award of a contract for the next stage of the works in spring 2020.

Early estimates indicate the work could cost £140 million, which includes a contingency. Engineers will continue to refine this estimate as the project progresses.

Whilst the full restoration project is still in the planning phase, the bridge’s decorative cast iron housings need to be partially dismantled to provide access for thorough investigation of the bridge’s structure and for surface preparation.

Setup for this dismantling and preparation phase started on Monday 25 November. This phase is funded by the initial funding of £25 million from TfL and is being carried out by Kier.

Due to the pandemic, social distancing measures have been put in place on the bridge. In addition, temporary hoarding and additional sensors have been installed.

For complaints or queries specifically relating to work on the bridge during this time, please contact TfL on 0343 222 1234 or visit TfL Help and Contact.

Richmond Council have reviewed proposals for a temporary traffic bridge and met directly with one of the proponents of this (Beckett Rankine).  However, the concept has a considerable number of challenges and we share the view of both Hammersmith & Fulham Council, TfL and the Government, that this is unfeasible.

Until 13 August 2020, the bridge successfully stayed open to pedestrians and cyclists allowing vital access to transport links north of the river. However, allowing access does limit the pace at which restoration works can be done. To address this, TfL are proposing to install a temporary walking and cycling bridge.

The proposed temporary bridge is a seven-metre-wide, prefabricated steel structure, supported by two piers in the river. The bridge would be step free and have a 5.5-metre-wide carriageway for pedestrians and cyclists. It would be accessed by shallow ramps from Queen Caroline Street on the north bank and from close to the junction of Castelnau and Riverview Gardens on the south bank.

Richmond upon Thames, along with Hammersmith & Fulham Council, is a Planning Authority for the temporary bridge.

Between 4 March and 5 April 2020, TfL undertook local engagement to gain a better understanding of people’s views about its plans for a temporary bridge.

Next steps and impact of COVID-19

Before the coronavirus pandemic, the planned next step was for TfL to submit the Planning Application for the temporary bridge. However, the pandemic has had an unprecedented impact on TfL’s finances. Around 80% of its income comes from fares and commercial revenue, and with ridership falling to historically low levels at the height of the crisis, its financial position has been severely impacted by the pandemic.

This means that both the repairs to the main bridge – for which funding was not in place before the pandemic – and building the temporary bridge are now contingent on additional funding being provided by the Government. In addition, the terms of any planning consent and the licenses required would require the full funding in place to carry out the repair of Hammersmith Bridge before a temporary bridge could be installed. This is to ensure the temporary bridge would only be there for a limited period.

Between TfL and the Greater London Authority (GLA), three funding bids have so far been submitted to Government for the repairs to Hammersmith Bridge. However, none have received funding from Government to date, and the ongoing impact of the pandemic means Government support is now needed more than ever.

Whilst negotiations with the Government are still ongoing, the Planning Application for the temporary bridge is on hold.

View the Council statement on this

TfL has extended its Dial-a-Ride (DaR) services to meet the needs of customers with mobility issues who live near Hammersmith Bridge.

Residents living within one mile of the bridge who meet Dial-a-Ride​’s membership criteria can call a dedicated helpline to arrange for assistance to take them to a pre-agreed location on the other side of the river.

Check if you are eligible at tfl.gov.uk/modes/dial-a-ride/.

While the responsibility for the design and delivery of the bridge refurbishment lies with Hammersmith and Fulham Council and TfL, we are asking them to consider the needs, concerns and suggestions of Richmond upon Thames residents and businesses.

In June and July 2019, Richmond Council conducted a survey to establish how the closure of the bridge to vehicular traffic is impacting the local community.

Over the six-week informal consultation, 2,707 local residents and businesses submitted their views on areas such as traffic congestion, air quality, parking, accessibility and public transport. They were also asked on their views on the bridge's future. The feedback has now been evaluated and a report has been passed onto Hammersmith and Fulham Council and TfL to be considered.

Who is responsible for the bridge?

Why is the bridge closed?

In 2015, H&F Council began a series of thorough reviews. The scope was to check all aspects of the bridge’s structure. These weekly safety checks included using new sensor technology to assess if the stresses being imposed on the bridge were causing structural damage.

The safety checks revealed that over decades the bridge’s bearings had seized up due to corrosion. This has caused the bridge’s natural and necessary flexibility to become compromised. The bridge was closed to motor vehicles in April after engineers discovered hairline micro-fractures had started to appear in the iron casings around the pedestals of the bridge.

In August 2020, the bridge was completely closed to pedestrians and cyclists due to urgent safety concerns. More information is available on the Hammersmith and Fulham Council website.

How long will the bridge be closed for?

At this stage, it could potentially take three years for the full repair work.

What are the different stages for delivering the work?

The full project is split into three key stages:

Hammersmith and Fulham's engineers advise they cannot give an exact estimation of how long the repair programme will take.

Who is going to pay for the work?

TfL have put forward £25 million for early works. H&F Council is working with TfL to identify funding for the main construction.

Is the bridge safe to cross? Who can use it?

The safety issues which have led to the bridge closure are due stress from the weight of vehicles on the bridge.

The bridge is currently completely closed. This includes to pedestrians, cyclists and all motor vehicles.

There are also restrictions on boats passing under the bridge. The Port of London Authority has advised that the bridge is closed to recreation and leisure vessels.

How are you managing the impacts of the closure on traffic and the environment?

TfL is providing us with regular updates on the traffic flow and volume as a result of the closure, which allows us to review traffic management plans (e.g. traffic lights) as appropriate.

We have requested mitigation funding from TfL to support traffic management and physical deterioration repairs on our roads as a result of the closure.

Any non-critical roadworks in the borough will be reviewed in consideration of the additional impact on traffic and public transport. For any emergency works, transport measures will be put in place to best ease traffic congestion.

We have a static air quality monitoring site on Castlenau (Barnes) as well as one in Teddington.

What is being done to help those impacted by the closure?

TfL has made changes to bus routes to provide alternatives routes to reach Hammersmith, or other main transport links.

For up to date information on buses and alternative transport options please visit the Transport for London website.

We are working with local businesses and business associations to assess the impact of the closure on business.

Residents and businesses can give feedback on how the closure is impacting them through our survey. Please note this survey is not a part of H&F Council and TfL's formal planning for the future of the bridge.

Will Richmond residents be able to have a say on the current impacts and on the plans for the bridge?

Decisions around the future of the bridge are made by H&F Council and TfL.

Richmond residents were able share their thoughts and ideas on the future of the bridge at two public meetings and through a survey (see above for details).

How will the bridge be used in the future?

Hammersmith Bridge is Grade II* listed, meaning it is a "particularly important" structure "of more than special interest". Listed structures require special consideration under the planning system, in order to protect them for future generations. Read more about Historic England Listed Buildings.

H&F Council is aiming to refurbish the bridge to full working order, but safety is always the priority. It is considering many options, including new, alternative bridges and tolling the road.

What about a temporary bridge?

Due to the significant petition put forward by our residents, we are seeking a meeting to review the possibilities of a temporary bridge.