Richmond Council has confirmed it will roll-out a series of safety measures to provide assurance to residents as the days get shorter, following the closure of Hammersmith Bridge to pedestrians and cyclists.

Thousands of Londoners, from both sides of the river, relied on Hammersmith Bridge to cross the river before it’s complete closure in August 2020. School children are particularly impacted and the Council has decided to act before the clocks change this weekend.

The Council will put in place four Parkguard marshals on bikes from Monday 2 November. They will patrol the towpath between Hammersmith Bridge and Beverley Brook (the Putney boundary of Richmond upon Thames borough) from 3 to 7pm on weekdays. Marshals on the Thames towpath will be DBS checked and able to administer first aid. They will be recognisable by high-visibility clothing, which will carry Richmond Council and Parkguard branding.

Following discussions with residents and local groups, the Council has agreed that the safest option for the route between Hammersmith Bridge and Barnes Bridge, is to encourage residents to use surrounding well-lit streets. The Council will continue to review this and consider any further enhancements to the road network.

The Council also intends to trial ground-level LED lighting to improve wayfinding along the towpath at the points where the path is closest to the riverbank.

Lastly, Richmond Council continues to press Hammersmith and Fulham Council and Hounslow Council to look at measures for the north side of the river.

“The complete closure of Hammersmith Bridge over the summer has posed a serious challenge to those who use the bridge to get to work, school and access services on both sides of the river. As we fast approach winter and the clocks going back, parents were understandably concerned about safety of their children and it has been a key priority for this Council to take action and provide a level of reassurance along this route while the bridge remains closed.”

“The Parkguard presence is a significant boost to security. We listened to many suggestions including for security lighting along the towpath, but due to the significant ecological and planning constraints, as well as the considerable time and cost of installation, we are glad we can offer this quick solution.

“Parkguard already do a brilliant job of patrolling our parks around the borough and I am confident their familiar presence be valued by those using the towpath.”

“We have taken much-needed action and crucially, put this Council’s money where its mouth is. Once again we urge the Government and other authorities to show similar resolve when it comes to the wider issues of connectivity and repair to Hammersmith Bridge.”

Parkguard marshals will remain in place until either Hammersmith Bridge reopens to pedestrians and cyclists, or until the start of British Summer Time in Spring 2021, whichever is soonest.

Funding for works will be ratified at the Council’s Transport and Air Quality Committee meeting on Thursday 5 November 2020. 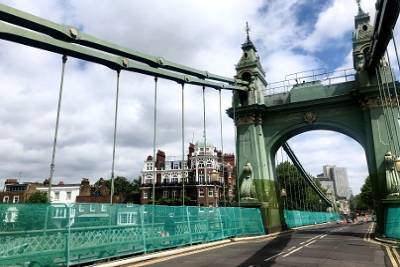 If you are a journalist and would like further information about this press release, contact  Effie Lochrane on 020 8487 5162.