At the Council meeting on 24 November, Cllr Penny Frost, Chair of the Education and Children’s Services Committee, asked Members to consider a motion acknowledging the impact of the pandemic on young people, particularly around examinations.

Due to COVID-19, pupils were not able to sit their end of year school exams and assessments were eventually made via teacher assessed grades.

Since then, Wales and Scotland have already agreed to cancel their GCSE and A Level end of year examinations in 2021, replacing them with externally set and marked assessment delivered in the classroom under teacher supervision. However, the Government has said that in England – the exams would only be delayed a few months.

Following representations from members of the Richmond Youth Council, regarding their concerns around the unfairness of the different arrangements across the UK, the Council last night agreed to lobby the Government and urge them to begin talks with Education Unions and education specialists, with a view to exploring the cancellation of GSCE, AS and A Level Examinations in 2021 in favour of moderated assessments carried out by teachers.

“Earlier this week I heard from members of the Richmond Youth Council. They expressed huge concerns about the Government examination plans in 2021. Particularly the fact that young people in Wales and Scotland will carry out moderated coursework in place of exams.

“School exams are stressful for young people. Therefore, the key thing should be that the playing field across the UK is the same. Otherwise, decisions will be made about the future of each young person, including university applications, from a different baseline. That is not fair.

“We are not saying that we want the exams to be cancelled. But I feel we owe it to our young people to at least have the conversation about suitable alternatives.

“Education is not as normal. Months of classroom learning have already been lost and over the months ahead, many of our young people will continue to have to spend varying degrees of time out of school.

“Rather than leaving pupils under a cloud of uncertainty and making yet more last-minute decisions, I urge the Government to further review their plans for 2021.” 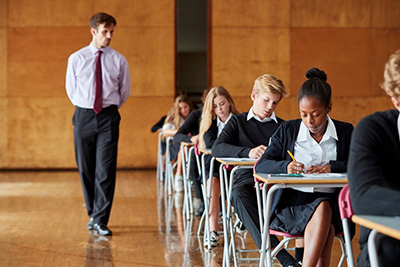