Work to start on urgent measures to make our streets safer

A series of rapid temporary measures will be installed on some of the borough’s busier roads and pavements to help people observe social distancing whilst making essential journeys.

Initially, temporary measures will be put in place at key pinch points from Richmond through to East Twickenham, as part of plans to assist residents with safe distancing from one another as they go about essential journeys on foot and bicycle.

In addition, over the next few weeks, as more people start travelling around the borough, the borough's newly established Rapid Response Team will visit those areas that are highlighted as having problems supporting social distancing – with urgent action taken if required.

This is just the first in a series of changes in the coming weeks and months. Further proposals will be announced shortly regarding plans for other priority town centres, improvements to commuter cycling facilities and actions to support schools when they return. The full strategy will be presented to the Transport and Air Quality Committee on Thursday 18 June 202.

Alongside these immediate measures, the Council will be carrying out work on towpaths, including additional signage and trimming back vegetation. Further long-term measures for towpaths are also being considered to address pinch points.

"We are getting started with a 'pathfinder' scheme in Richmond Town Centre/East Twickenham. The measures we are putting in place will deal with the critical pedestrian pinch-point of Richmond Bridge and aim to support this important shopping district.

"Our new Rapid Response Team will also be on hand to assess other areas in the borough that are identified as having problems supporting social distancing.

"These measures are the first of many, with officers exploring other locations and longer-term improvements that aim to make it safer for people to move around once public movement restrictions are eased." 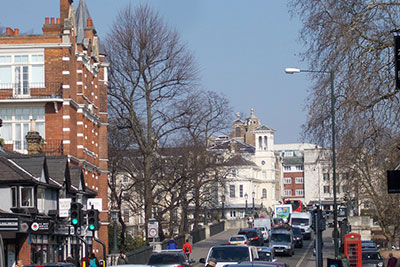 The urgent changes will be rolled out in Richmond Town Centre and East Twickenham, from the week commencing Sunday 17 May 2020, and include: