Transport for London (TfL) should think 'big' and introduce radical changes on its road network, to encourage more people to walk and cycle, says Richmond Council.

In a letter to Will Norman, the Walking and Cycling Commissioner, and Heidi Alexander, the Deputy Mayor of London for Transport, Cllr Alexander Ehmann the Chair of Richmond’s Highways and Air Quality Committee, invited TfL to work with the Council on their future plans to improve temporary cycle and pedestrian infrastructure across the Capital.

In the current climate, given the need for social distancing, the requests for people to avoid public transport and the growing desire to encourage more people to walk and cycle, he urged TfL to "think big and aim to make meaningful change."

In his letter he specifically highlighted the unsatisfactory shared cycling/walking arrangements along the A316 and he urged TfL to consider a reclamation of one of the two lanes of directional traffic along the A316 to provide safe, segregated cycling space and even a reduction of speed limits on the road, to make it more friendly for cyclists and walkers.

"We have already announced some of our plans to make Richmond safer for pedestrians and cyclists. The pathfinder works in Richmond and East Twickenham are already in place and we can see they are making a difference.

"Whilst we will have more announcements over the coming weeks on additional measures we will be introducing, we also need Transport for London to look urgently at the A316.

"The road is a major vein throughout our borough and it desperately needs be adapted to support people using more active forms of transport." 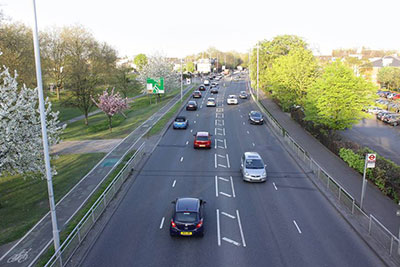