Following the publication of the initial overwhelmingly positive 'headline' results from the recent Twickenham Riverside engagement, the full report has now been published.

'I’m really pleased that we’re able to release the full findings from the recent consultation exercise. It’s clear that the majority of respondents support the vision that this Council has for Twickenham Riverside; a vision which, thanks to the beautiful designs from Hopkins Architects will create the heart for Twickenham which has been promised by successive administrations over the last thirty years but, so far, never delivered.'

Over the past twelve months, Hopkins Architects and their team, with help from the Council, have been working hard to develop the design for the Twickenham Riverside site. This follows a design competition held in 2019.

The scheme will deliver housing (including affordable homes), office space, shops, a café and pub/restaurant and plenty of open space. This open space includes relocating the Diamond Jubilee Gardens into the centre of the proposed development, with suggestions for event space, an exciting children’s play area and pétanque pitches as well as terraced lawns, planting and trees. The proposal also includes public open space along the Embankment with a flexible events space and a widened Water Lane with inviting views from King Street.

Earlier this year, residents were asked their views on the proposals – and 829 people took the opportunity to have their say.

The results show that:

The Council also ran a separate engagement exercise with children and young people with a summary report also being published.

The consultation results will be used to inform design development as the Council and Design Team work towards a submission of a planning application this summer. 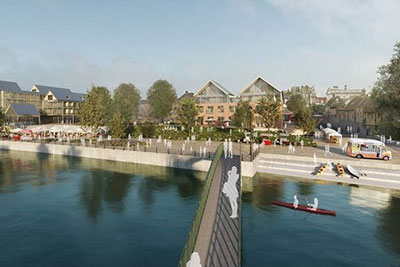