The borough’s first ‘space to shop’ zone in Church Street in Twickenham could be made permanent, following a consultation where over 94% of residents and traders said that they felt the pedestrianisation should be continued.

The car-free measures were implemented in June, to help facilitate social distancing as part of the Council’s Covid-19 programme. As a result of these measures, many local businesses have been able to extend their alfresco dining arrangements, drawing more customers to the area.

Since its introduction, the car-free street has been welcomed with many requesting that the measures be considered on a permanent basis.

The Council carried out a consultation and over 1,547 people had their say. 95% of people said that the temporary measures had worked well. In addition, many respondents stated that the car-free zone had helped enhance the atmosphere of the street, improved resident safety and supported alfresco dining.

On 18 March 2021, the Transport and Air Quality Committee will discuss proposals to make the scheme permanent through the advertisement and making of traffic management orders. The proposals will be reviewed to include possible remedial actions to address some of the concerns raised by a small number of people, including arrangements for disabled parking, servicing of properties, cycling provision and street signage.

'I am pleased that we’ve had such a positive response to the pedestrianisation of Church Street. The charm of the road has certainly been enhanced since the car-free zone was implemented, with the reduction in noise and with the provision of space to amble and in a socially distanced manner.

'The overwhelming feedback on pedestrianisation was positive. It really does make you wonder why this change has been so long in the making!”

'It’s also great to see the change having a wider impact with news that a Gail’s Bakery selected Church Street for a new store, in part, because of its people-friendly and car-free environment.' 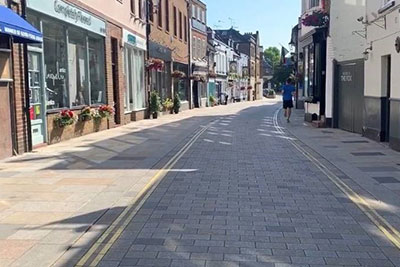