Steps you can take which may reduce your risk of dementia

A new campaign in Richmond upon Thames is being launched to increase awareness of the healthy behaviours you can adopt which may help reduce your risk of getting dementia.

Dementia is not a single disease but is a term used to describe the symptoms that occur when there is a decline in brain function. It can affect memory, thinking skills and other mental abilities.

In January 2021, 1,145 people aged over 65 years old registered with a GP in Richmond upon Thames had a recorded diagnosis of dementia. This figure climbs to 1,722 - or 5.48% of those aged over 65 in the borough - when estimates of those living with undiagnosed dementia are added.

Current evidence suggests that up to 30% of the most common forms of dementia can be prevented or delayed by adopting healthier behaviours such as increasing physical activity and reducing alcohol intake. However, only 33% of people think it's possible to reduce their risk of dementia.

There is evidence to suggest that changing certain behaviours may help reduce your risk of developing dementia and these include:

Find out more about what you can do to encourage these healthy behaviours.

"Researchers are still investigating how dementia develops, and whilst there is no certain way to prevent all types of dementia, there is very good evidence that supports the idea that what is good for your body is also good for your brain. Dementia is a major global health problem affecting millions of people, and it’s important that everyone is aware of the various ways to potentially reduce the risk of it developing.

"The seven healthy behaviours that we want to raise awareness of during this campaign are all about living a healthy lifestyle, which won't just help to reduce your risk of developing dementia but could also help prevent other diseases such as strokes and heart attacks.

"Over the next two months or so, each of the seven healthy behaviours will be explored in the context of dementia and with reference to the various support services that are available to help people in Richmond upon Thames live healthier lives."

This campaign has been developed by the Public Health Department within the Adult Social Care and Public Health Directorate at London Borough of Richmond upon Thames, and is based on the Think Brain Health, a public awareness and engagement campaign from Alzheimer's Research UK (ARUK) first launched in 2021. The ARUK campaign was designed to build an appreciation among the public – particularly those in their 40s and 50s – about the importance of good brain health, and how taking positive steps can help reduce the risk of dementia later on. See Alzheimer's Research UK.

For more information on the campaign, please contact fenna.maynard@richmondandwandsworth.gov.uk. 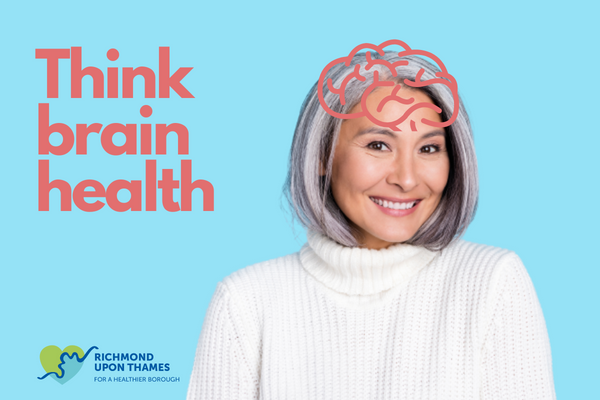