A group of travellers who have been on Kew Green since Thursday have left the site, after swift legal action from Richmond Council resulted in a High Court decision to give the Council powers to evict them.

The travellers voluntarily left yesterday evening (Tuesday 1 June) and Council officers were on site immediately to inspect for damage. The group left some bags of rubbish, which Council contractors cleared early this morning. No damage has been caused to the site.

Although the travellers have now left, the Council will still serve the Order of Possession today, which is valid for three months.

"Thanks to our prompt action last week we were able to get a court hearing as soon as possible after the Bank Holiday, which has resulted in a Possession Order and the traveller group voluntarily leaving the site before we were required to evict them.

"In this instance we did not have the same power we have had in recent years, following a High Court order earlier this month which denied the Council’s request to extend the previous expedited injunction process. We moved as quickly as legally possible to ensure that the travellers could be moved on from Kew Green and we hope that this swift action deters this group from returning and others from coming to the borough.

"I would like to thank Police, our Parkguard officers and our cleansing team who have been on site since Thursday to monitor the site and clear any waste left in the area."

The travellers arrived last Thursday afternoon (27 May). As soon as the Council were notified, officers visited to conduct welfare checks and site assessment and request they move on. The group did not co-operate.

The Council issued a legal notice of the hearing date on Saturday morning. Unfortunately, the group continued to refuse to leave. Over the weekend, the Council’s Parkguard service, along with the Police, regularly patrolled the site. Reports of human waste being deposited in nearby lanes, required immediate response from the Council's cleansing team. 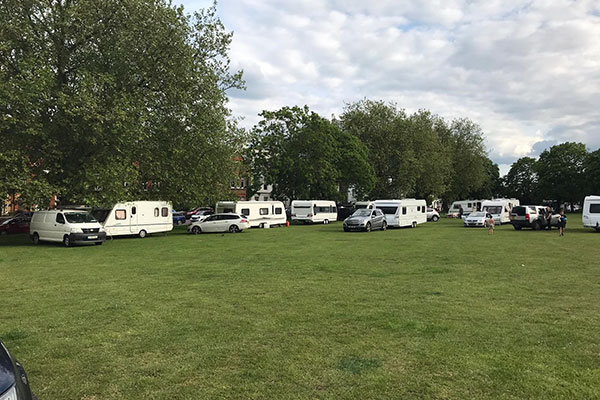