Richmond Council is setting the record straight regarding a local licensing infringement, following inaccurate information being spread on social media.

The Waterman’s Arms in Barnes last week was prevented from continuing to operate a click and collect service after it was considered to be repeatedly flouting the COVID-19 rules – ignoring numerous warnings from the Council and local Police.

The latest action followed a series of other enforcement measures taken by the Council which were prompted by complaints from local residents and which were supported by the local Police.

Since the start of the pandemic, the Council and local Police have received a large number of complaints regarding The Waterman’s Arms, this includes recently during the second lockdown where they operated a click and collect service.

Council officers received dozens of complaints from the local community and worked closely with the Police regarding the pub. Following numerous visits to the venue, officers found:

In early July, the pub was issued with a Community Protection Notice. However, problems persisted and in late July, residents sought a review of their Premise Licence at the Council’s Licensing Committee. Upon hearing the application, the Licensing Committee found that there were issues of public nuisance and antisocial behaviour and imposed additional conditions on the licence to try and resolve the problems.

During the second lockdown, the problems continued to escalate, and the management were issued with further warnings on the 10 and 20 November.

When the pub management refused to take action, they were issued with a Prohibition Notice on the 25 November, which prevented them from continuing to operate a click and collect service until 2 December. The order did not prevent them from operating a delivery service.

“The suggestion that the Council has acted disproportionately in response to concerns raised about how this particular pub has been operating within the pandemic is outrageous. This Council is not in the business of punishing pubs, indeed nobody who knows me would ever consider me to be anti-pub. However, the bottom line is this – the regulations are NOT in place to punish pubs. They exist to stop the spread of Coronavirus and subsequently SAVE LIVES.

“We have hundreds of pubs across the borough that have worked so hard to follow the rules. And, whilst the impact of the restrictions is clearly financially tough – they are there to stop people getting sick and dying.

“We have always been very clear. We will work with businesses to help them understand the rules. If we hear of infringements – we will discuss them with the businesses and help them to operate within the law. However, if businesses repeatedly fail to follow the letter of the law, putting lives at risk, we will take action.

“We have a very different view on what actually happened at The Waterman’s Arms and on the events that built up to the moment depicted in a wholly biased interview currently circulating on social media. However, what is made clear in the interview is that the pubs failure to take responsibility is an ongoing issue – not a singular moment in time.”

“Richmond Council and the Met’s South West licensing team have been working together to engage with The Waterman’s Arms in a stepped approach, to ensure the pub is adhering to the current Covid-19 regulations and protecting the safety of the public and its customers.

“Unfortunately, both the Police and Council have continued to receive complaints from the public and the pub was found in breach of the regulations several times. The Waterman’s Arms was visited on 20 November by Police and the Council at separate times and found to be breaching the regulations again.

“The pub was issued a Prohibition Notice which stopped it from operating a click and collect service prior to today’s new regulations. This is in addition to a hearing in July which reduced the pub’s operating times for sales.”

Photographs taken by officers during their inspections at the Watermans Arms. 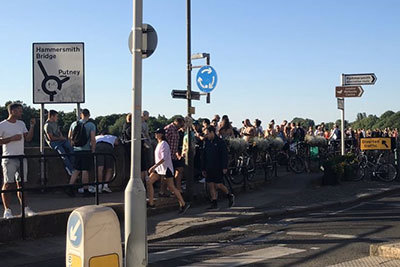 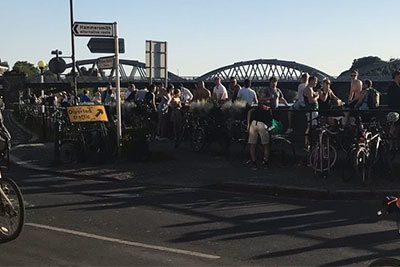