Councils have called on Heathrow to abandon once and for all its bid for a third runway and concentrate instead on working with the aviation industry to achieve zero carbon emissions and reduce noise impacts for overflown communities.

The airport is due to challenge February’s Court of Appeal ruling against the expansion plan in October at the Supreme Court.

The councils said today (Tuesday 15 September 2020) that there was no logic in the airport persisting with its runway fantasy.

"COVID-19 has changed everything. This is a unique period when we are all rethinking traditional assumptions about how we work, travel and grow our economies. As local councils we want the industry to get back on its feet. But this won't work without a fundamental rethink about the place of aviation in our society – and indeed where future capacity is most needed.

Even Heathrow's chief executive has admitted that a new runway would not be needed for years due to the pandemic. Yet still the airport and its shareholders press on with the process and the prize of a planning permission for a runway that will never be built.

The kind of growth that the third runway plan was predicated on was never sustainable. It is an insult to the people who have for years had their lives blighted by the threat of expansion to persist in keeping the threat alive."

"Give the challenges that the aviation industry faces today it beggars belief that one airport should think its own demand for extra capacity should still be on the table.

"At a time when the sector is benefiting from tax-payer funded support – and indeed seeking further help through cuts in airport passenger duty – the priority should be to rebuild the entire aviation economy and set it on a more sustainable footing.

"This should start with a legally binding commitment to achieving zero emissions. It should also mean a permanent end to night flights and the adoption of tougher measures to limit noise impacts. This should include rejecting the practice of 'route concentration' as a means of squeezing in more flights over densely populated areas. All this does is both increase noise and emissions."

The Court of Appeal ruled in February 2020 that the Government had not taken into account the requirements of the Paris Agreement on Climate Change when drawing up its national policy statement (ANPS) giving support to Heathrow expansion. The Court said that the ANPS is legally ineffective unless and until it is reviewed by the Government. Ministers have said they will not be appealing the ruling.

A group of local councils – Hillingdon, Wandsworth, Richmond upon Thames, Hammersmith and Fulham, and Windsor and Maidenhead together with the Mayor of London and Greenpeace – had challenged the ANPS alongside environmental groups Plan B and Friends of the Earth. 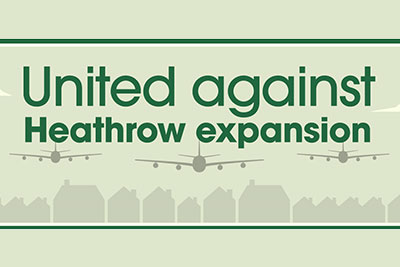