Children and families can join the Mayor of Richmond upon Thames for a charity screening of Disney’s original Lion King this Christmas.

The screening on the Saturday 14 December at 10am will be at the Curzon Cinema in Richmond.

Set against the majesty of the Serengeti Plains, the Lion King has been a worldwide phenomenon. At the heart of the story is the powerful tale of Simba and his epic journey from wide-eyed cub to his destined role as King of the Pride Lands.

Keen Disney fans will be able to sing along to classics such as Circle of Life and Hakuna Matata. With the lyrics being shown on the screen to help parents and grandparents join in. Young attendees are invited to dress up as their favourite Disney character and there will be a prize for the best dressed!

Tickets are now on sale and cost only £5.

All money raised will be donated to the Mayor’s Charities: Home-Start and the Otakar Kraus Music Trust.

"The Lion King is a classic film that will grace the TVs of many people with young children this Christmas. This is an opportunity to see it on the big screen and sing along with other Simba, Pumbaa and Timon fans in Richmond."

For more information, or to book tickets, go to: The Mayors charities page. 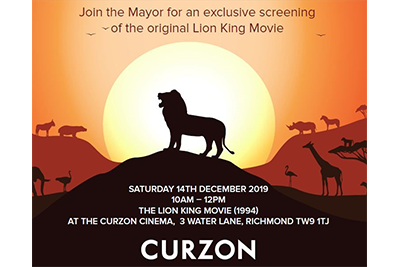