Over 300 young footballers from 36 schools put on their boots and took to the pitch to contest for the top team title.

After the morning’s round-robin stages, the team draw was split into Knockout Cup and Plate competitions for the afternoons round of matches. St Stephens had a narrow but decisive 1-0 win against St Marys in the Plate Final, with East Sheen having the same winning score to secure the Cup victory.

As winners of the Cup, East Sheen will now go on to represent Richmond upon Thames in the London School Games competition in March next year.

"Congratulations must go to East Sheen Primary School. It is great that so many young girls are playing football and getting involved in sport. The Women’s World Cup earlier this year has had a really positive impact on girls and football and we want to ensure we support this level of interest - our sports service has a number of programmes for people of all abilities."

For more information about sports programmes in the borough, go to our Sports page. 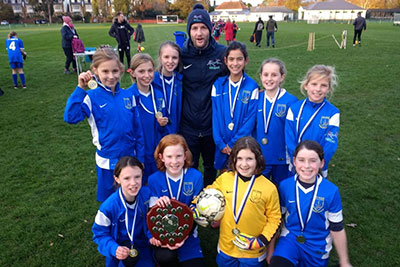