Hundreds of residents joined the Council’s first virtual Community Conversation events on Friday, to discuss the issue of anti-social behaviour throughout Richmond and on Twickenham Green.

At the borough’s first public Zoom events, hosted by the Leader of Richmond Council and senior representatives from the local police, over 70 Twickenham residents raised concerns about late night revellers causing unacceptable noise, public urination and defecation and litter – resulting in many fearful for their safety and property.

At a subsequent event – over 170 Richmond residents expressed similar concerns, with the situation escalating since the Pandemic lockdown measures have been eased.

“Having this kind of unruly behaviour on your doorstep is unacceptable. Unfortunately, as we have seen from footage across other parts of the Capital – it is not unique to Richmond upon Thames.

“This is not just about enforcement. It is about everyone in the borough taking responsibility. That includes parents knowing where their children are and what they are doing, supermarkets selling alcohol responsibly and those who are socialising in our open spaces to not act like idiots and go home if they can’t find a bathroom.”

At both events, Cllr Roberts was joined by ward councillors, senior Council officers – including the Director of Environment and Heads of Licencing and Community Safety and Chief Superintendent Sally Benatar and Inspector Rebecca Robinson from the Metropolitan Police.

In each of the 90-minute events, residents were given the opportunity to share their concerns. As a result, the Council agreed to increase capacity of the borough’s Park Guard service (park security provider) – particularly over the weekends.

The Council has also increased the payment to those businesses who join the borough’s Community Toilet Scheme for the next three months – agreeing to open their toilet facilities for non-paying customers.  Officers are also investigating the possibility of opening new public toilets in both Town Centres.

Licencing officers have written to all cafes, pubs and restaurants in the borough, to remind them that if they are currently open for business and have customer toilets – then they should be open.

In addition, at the Richmond event, representatives from both Sainsbury’s and Tesco’s attended the discussion. Cllr Roberts pleaded with them to be more responsible with their discounts and sales.

“The Green is full of people who have stocked up with cheap booze from nearby supermarkets. We know it has been tough for local businesses – but they need to take responsibility for their actions. I hope that the supermarkets that attended these meetings heard how they are letting so many local people down and make changes to how they market and sell alcohol.”

The Police equally emphasised to local people that they are working hard to deal with the unacceptable behaviour that is understandably causing concern for residents. They do have the powers they need to deal with the rise in anti-social behaviour and encourage the public to continue to report it. Over the weekend an increased numbers of officers were on duty, including volunteer Special Constables. Unlicensed music events and large gatherings in open spaces are illegal and the public can report suspected events by dialling 101, by tweeting @MetCC or by calling Crimestoppers anonymously on 0800 555 111.

“The Community Conversations via Zoom were a great opportunity to hear directly from residents of Richmond and Twickenham. Our role as the police is to keep our communities safe and we are determined to protect the law-abiding public and respond to their concerns with a visible police presence, both during the lockdown and in the long-term future. The easing of the lockdown is bringing fresh challenges and we recognise the need to provide a robust and proportionate policing response to it.”

See videos of the events: 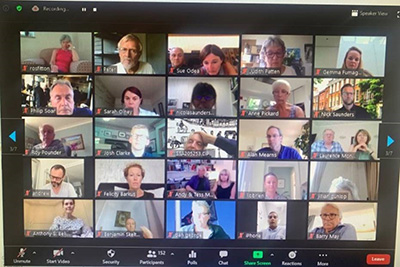