Last year, Richmond joined forces with four local councils, the Mayor of London and Greenpeace, to legally challenge the Government’s decision to favour a proposal for a new north-west runway at Heathrow.

The partnership were joined by others who supported the challenge with their own claims for Judicial Review.

Together they argued strongly that the Government’s decision to adopt its Airports National Policy Statement (ANPS) was unlawful on several key grounds including climate change, noise and air quality.

In May 2019 the Divisional Court refused all the applications for judicial review.

However, the Council and its co-claimants applied to the Court of Appeal to overturn this judgement, which was heard in October last year.

Today, (27 February 2020) the Judges handed down their judgement. In their ruling they state that the Government failed to take into account its own climate change obligations under the Paris Agreement which is "legally fatal to the ANPS".

The Court has sent a clear message to the Government that it needs to rethink its airports strategy. This is a momentous victory for Richmond’s residents and over a million Londoners.

"This judgement is nothing short of a victory. It leaves the Government’s airports policy in tatters – it surely must be the final nail in the coffin for Heathrow’s attempts to steamroll over local and national opposition to their disastrous third runway plans.

"The expansion of Heathrow would be a catastrophe for our climate and environment and for the thousands of Londoners who would be forced to live with the huge disruption it will cause.

"If the Government wants to pursue its plans for Heathrow expansion, it must now go back and revisit its own airports policy.

"Rather than the Government attempting to battle on, I hope that they will now take a minute and realise that the only way forward is for them to focus their efforts into developing a sustainable transport policy that puts the health of residents and the environment front and centre of a proposal." 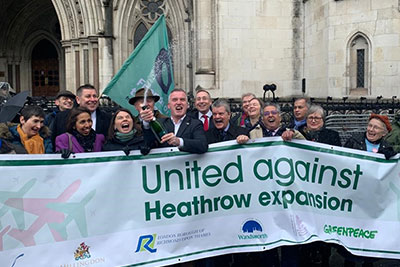