Cllr Richard Bennett, Leader of one of the Council's opposition groups, proposed the first motion.

'Council joins the rapidly growing number of councils that have declared a 'Climate Change Emergency'. It rejects the idea that this declaration is a symbolic gesture and will give substance to its commitment.

'Council therefore resolves to become recognised as the greenest London borough. It will undertake the factual analysis, target setting, and produce the strategy and action plans necessary by January 2020, in order to realise this goal and become carbon neutral by 2030.'

'I am glad that finally urgency is being registered on this issue. Local authorities can play their role - a little from a lot can make a big impact.

'Being the greenest borough is about more than just CO2 emissions. We need to demand more of ourselves to achieve this goal. The upcoming Climate Change Strategy needs to focus on achieving the goal of being carbon neutral by 2030. We owe that to future generations.

'The good thing is that the zeitgeist is certainly with us on this issue – we are joining the other local authorities and London boroughs in declaring a climate emergency and the wider community is more aware of the importance of tackling climate change than ever before. We need to harness that awareness and work together to tackle climate change now whilst there is still time to make a difference.'

'Council: 1. Endorses Parliament’s declaration of a national climate change emergency; 2. Reaffirms the Council’s response to the Government’s Aviation Strategy consultation and condemns said strategy’s entirely inadequate approach to mitigating climate change; 3. Looks forward to the publication of a draft Borough Climate Change & Sustainability Strategy, its discussion at the July meeting of the ESCS Committee, the subsequent borough-wide consultation and the adoption of the finalised strategy soon after.'

'Climate Change is the biggest challenge society faces. No community is exempt from its effects and it is right that the Council takes urgent steps to play its part in tackling this most pressing of issues. Any expansion of airports (such as the third runway at Heathrow) or increase in air travel accelerates climate change yet the Government excludes aviation from playing its part in reducing carbon emissions. This is completely unacceptable and we will make this point as strongly as we can.'

'Climate change and the potentially extreme weather events associated with it will affect everyone.

'And it’s my view that, when we detect a problem, when it becomes undeniable, we must recognise it, describe it, and form a strategy to tackle it, which we must then implement.

'So, I share Cllr Bennett’s rejection of the notion that a climate emergency declaration is merely a symbolic gesture. On the contrary, it is a recognition of an overwhelming reality and an essential step in deciding to take action.'

In her speech Cllr Neden-Watts looked forward to the Council’s upcoming Climate Change Strategy which will come before Committee in January 2020.

The overarching strategy sets out five priorities that outlines how the Council will reduce emissions from its own estate and operations, reduce energy consumption and emissions by promoting energy efficiency measures, sustainable construction, renewable energy sources, and behaviour change, reducing emissions from transport by promoting sustainable transport, reducing car travel and traffic congestion, and encouraging behaviour change, reducing consumption of resources, increasing recycling and reducing waste and supporting council services, residents and businesses to adapt to the impacts of climate change. 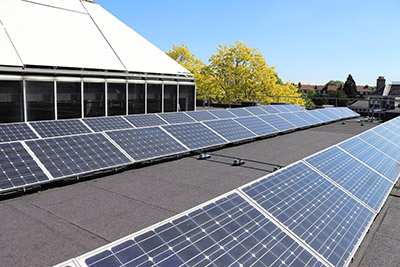