Bank your bras at Richmond Council

Calling all ladies of Richmond upon Thames – we need your old bras.

Richmond Council has teamed up with Against Breast Cancer to collect old bras – for every tonne of bras collected, the charity receives vital funds for pioneering breast cancer research.

A collection point has been placed in the Civic Centre reception. The collected garments will be sorted by the charity and wearable bras will be given a new lease of life, sent to developing countries such as Togo, Ghana and Kenya, where bras remain too expensive to produce locally.

Bras that aren’t wearable anymore will be recycled for their fabric, preventing them from being sent to landfill.

For every tonne of bras collected, Against Breast Cancer receives £700 to fund their research.

The bank has been organised by the staff Women’s Network at Richmond and Wandsworth councils. The group have already held two fundraising cake sales this month – raising £383.09 for charities including Against Breast Cancer.

Sarah Goodwin, Chair of the Women’s Network at Richmond and Wandsworth councils, said:

"Most women will have bras lurking at the back of their underwear draw that they haven’t worn for a long time. I urge everyone to have a clean out!

"Most charity shops don’t accept bras. Therefore, they quite often get thrown away. Many of these bras are wearable. Before you open the rubbish bin – please take a minute to think about the money they could generate for charity and know that there are some women in African countries that will still be able to benefit from them." 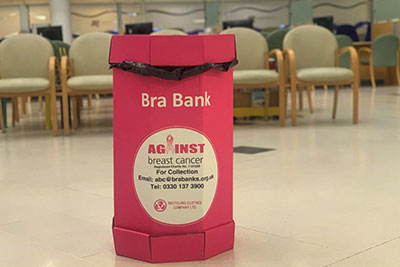