The amended proposals on a 20mph limit were published earlier this year following a 12-week consultation held in 2018.

The new proposals take into account the views of residents, including a revision of the proposed 20mph speed limit on the A308 between Kingston and Hampton, including Hampton Court Road, Upper Sunbury Road and Lower Sunbury Road (excluding Thames Street). In addition, the initial exclusion of the A310 between Kingston Bridge roundabout and Twickenham and part of the A305 between Apex Corner roundabout and Twickenham town centre.

These exclusions would be subject to a study aimed at introducing collision and speed reduction measures and would determine whether to implement 20mph on these section of roads at a future time.

“A majority of residents who took part in this consultation acknowledge a borough-wide 20mph limit would improve the safety of our roads. And for the oldest and youngest in our communities were overwhelmingly in favour of the proposals.

“I understand the strong feelings both sides of this debate expressed during the consultation. That’s why we have considered the feedback and put forward an amended scheme which takes into account the reservations people had particularly around evaluation, enforcement and the practical implementation of a 20mph limit.

“We will now carry out further research and evaluation on a number of roads, ensuring local residents have a strong voice in that process.”

A speed limit order will be advertised and any representations considered before the decision is implemented. 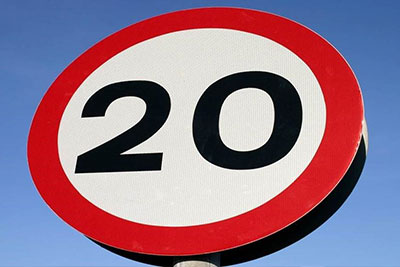